Javi Gracia is an admirer of Étienne Capoue and wants to sign him for Valencia this summer, that has been reported for some weeks now.

Marca explains the Watford midfielder is the one chosen by the La Liga side’s manager because he sees the 32-year-old as a ‘key piece’ to strengthen his squad.

Gracia, who managed the Frenchman at Vicarage Road, has been ‘behind him’ for months.

The ‘delicate economic situation’ of the Spanish club has seen them offer no guarantees to their new manager.

This has not gone down well with the coach because he ‘only wants’ Capoue, reports Marca.

Gracia is of the belief the Watford player’s signing can bolster Los Ches midfield, despite his age and price tag. Therefore, Valencia have revisited his file.

Valencia have already started negotiations with the Championship side. ‘Another try. But with many conditions’, states Marca, providing no details about those ‘conditions’. He earns in excess of €2m net per year and that has become a ‘problem’.

Super Deporte also explains Capoue is a ‘priority’ target for Gracia. However, his side are facing ‘complications’ reaching an agreement with Watford.

Valencia’s search for a midfielder has now seen them start negotiations with two other clubs, with the approval of their manager. One club is Leicester City, as Adrien Silva has emerged as a target. 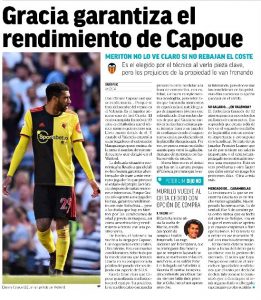 Silva is not in Brendan Rodgers’ plans, and the Foxes have made him available in the transfer market. It’s claimed the operation to sign the Portuguese midfielder is ‘most advanced’.

According to Super Deporte, Silva could either leave Leicester as a free agent this summer or extend his contract for one more year. The latter would suggest Valencia are in negotiations with Leicester to take him on a loan deal.