On Wednesday, Sport came up with a report stating Barcelona are ‘negotiating a possible exchange’ deal with Arsenal for Pierre-Emerick Aubameyang and Philippe Coutinho.

This came out while the Gunners were in talks with Real Madrid to sign Martin Ødegaard on a permanent transfer.

Various reports have indicated Ødegaard is edging closer to completing a switch to the Emirates.

After investing in the Norway international, the report states Mikel Arteta’s side will look at the possible signing of the former Liverpool man ‘calmly’, not only because he plays in a position similar to Ødegaard, but also due to the finances involved in the operation.

Arsenal’s interest in Coutinho ‘remains’, but they want to ‘take their time to analyse’ if the deal is ‘viable’ for them. 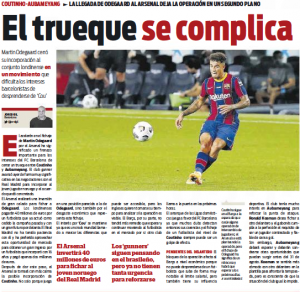 Barcelona have no choice but to wait and find out if any other club will come forward to take the 29-year-old.

The La Liga side are keen to get Coutinho off their wage bill and if the barter deal with Arsenal doesn’t go through, Aubameyang cannot move to the Camp Nou.