Marca are throwing a little cold water on the Catalan press and their growing suggestions, and outright claims, that Philippe Coutinho moving to Barcelona is a real thing for the January window.

Over in Madrid, Marca say their sources at Barcelona suggest there’s some pessimism over whether it’d be reasonably possible to get Coutinho in January.

Sources are said to have told Marca that, whatever Barcelona say or brag about publicly, those in charge at the club believe it will be ‘very complicated’ to sign Coutinho from Liverpool during January, because it’s hard to do transfers ‘of this magnitude in winter’. 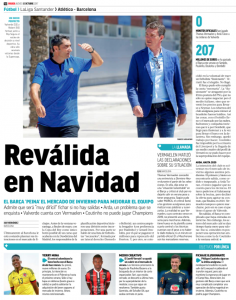 One hand at Barcelona needs to tell the other hand what it’s doing, or at least cool down the public comments, and potential leaks to the Catalan media.

Marca believe Barcelona could look to add in January, but there’s no level of panic at the club, and they’re not going to go to war with Liverpool for a player who can’t even take part in the Champions League.

Sure, they’d like Coutinho in January, but aren’t obsessed with it.