Steve Bruce secured Yannick Bolasie for Aston Villa towards the end of the Championship loan window. It was something of a coup for Villa, because Bolasie certainly hasn’t been short of takers this summer.

There’s been countless Turkish reports linking him with a move to one of the big clubs there, but Everton’s terms may well have caused a problem with regards to loan fee and the player’s wages.

It wasn’t just in Turkey where Aston Villa had competition.

Sunday’s edition of L’Equipe reports Saint-Etienne had been very keen on doing a deal with Everton for the former Crystal Palace player. The French newspaper describes Bolasie as being the kind of footballer who, when on form, can raise a stadium to its feet.

This is what attracted ASSE and the club held ‘constructive’ negotiations.

Saint-Etienne were then faced with a ‘complex financial situation’ and couldn’t fund a deal for Bolasie, even on loan, unless they sold Robert Beric. 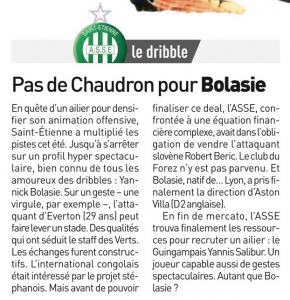 That didn’t happen in time, and therefore Bolasie move to Aston Villa.

In the end, the Ligue 1 club got Yannis Salibur on loan from Guingamp, although L’Equipe question if he’s really as exciting as Bolasie.

From South America: Steve Bruce ‘more out’ of Newcastle United than Miguel Almiron