Eric García’s contract at Manchester City expires in the summer and on Monday, Pep Guardiola admitted he is “pretty sure” the centre-back will leave the club after this season.

Barcelona have been heavily backed by the Spanish press to be the defender’s next destination.

According to Mundo Deportivo, the La Liga side ‘know’ Arsenal and Paris Saint-Germain are their ‘rivals’ in the 20-year-old’s chase.

The title reads ‘PSG and Arsenal also want to take Eric’ as the Spain international fits very well into the Mauricio Pochettino and Mikel Arteta philosophies.

It’s claimed the north London club and the Ligue 1 winners have moved for the player since their managers know the City man very well and also appreciate his qualities.

Pochettino has seen García develop from his time at Tottenham Hotspur, while Arteta has watched his compatriot closely during his time as Guardiola’s assistant at City. Mundo state the Arsenal manager has been a ‘partner’ in the central defender’s development. 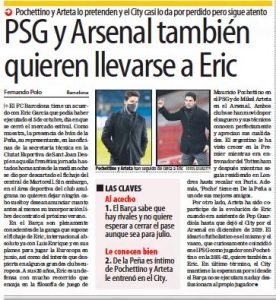 Barcelona have long been interested in him and they don’t want to leave ‘any loose ends’ in their efforts to acquire García’s services.

Therefore, the Catalan club want to announce his transfer ‘as soon as possible’, even if it means García will arrive at the Camp Nou as a free agent in the summer.

City remain hopeful that either PSG or Arsenal could come to take the Spaniard, ‘in case Barça does not execute anything and disappoints the player himself’.