Home Europe ‘The competition is high’ – Tottenham named among suitors for forward after...
SHARE

Tottenham are among the competition for Marseille striker Arkadiusz Milik this summer as Juventus eye a deal.

That’s according to Tuttosport, who say Tottenham are one of several clubs keen on the Polish forward.

The newspaper explains that with Cristiano Ronaldo’s future yet to be decided, Juventus are planning in case he leaves.

His departure would require at least two signings, and one of those is likely an extension to Alvaro Morata’s loan deal.

That would fill up one spot, and they have a list of options to take up the other, with Moise Kean, Milik and Donyell Malen all considered as candidates.

Milik has been ‘convincing’ in Ligue 1 with a ‘sense of goals, technique and physicality’ but ‘the competition is high’ for his signature.

Tuttosport state that Atlético Madrid, Tottenham and Paris Saint Germain are all in for the striker this summer. 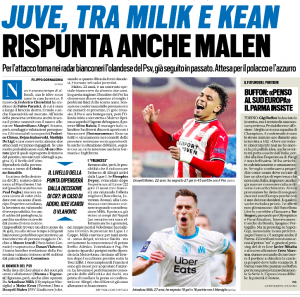 There’s no mention of whether the interested parties have opened negotiations with Marseille or anything of that nature, just that they’re keen.

Tottenham’s interest is surely going to rest on the future of Harry Kane, though. If he leaves, they’ll need a replacement, and perhaps that’s where Milik comes into the picture.

He was heavily linked with Spurs last year, indeed at one point, his agent flew to London, and it seems they’re ready to reactivate that interest after his success in France.