Arsenal signed William Saliba from Saint-Étienne in 2019 and immediately loaned him back to the French club.

The defender’s development in his final season at Saint-Étienne was hindered due to injuries, personal reasons and the coronavirus outbreak.

On his return to the north London club, Mikel Arteta was in charge at the Emirates. The 20-year-old found it difficult to make an appearance for the Gunners under the Spaniard.

After spending the second half of last season on loan at OGC Nice, the centre-back joined Marseille on a temporary deal in the summer. He is enjoying more game time and is excelling under the orders of Jorge Sampaoli.

L’Equipe take a look at what went wrong for him in London. Arteta felt the player was not ready for Arsenal last season, which is why he left him out of the Europa League squad.

It’s even said that with Arteta, ‘communication (was) close to nothing’. For months, Saliba used to train and go back home, and was not given any explanation for his situation.

Despite the ‘complicated start’ with the Gunners, the newspaper points out ‘nothing is broken with Arsenal’. 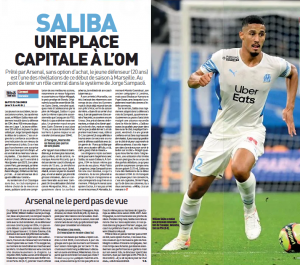 The English club are closely watching his growth in Ligue 1. Edu Gaspar is ‘keeping control of his future’, and an example of this is his presence in the stadium to watch the player in action against Paris Saint-Germain last month.

Edu is playing the long game with Saliba and time will tell whether or not it will pay off for Arsenal.