On October 31st, we relayed news from Spain that it is impossible for Florentino Pérez to forget his ‘great object of desire’ Mauricio Pochettino as a managerial candidate at Real Madrid.

Having already parted ways with Julen Lopetegui, Santiago Solari is the ‘temporary manager’ of the Champions League winners.

Catalan newspaper Sport again relays that Perez’s desire is to get the Tottenham boss, who has never hidden his ‘sympathy’ for the club, but Perez faces ‘two problems’ in acquiring his services.

The first, is to fix the immediate situation and if Solari does well, hand him the job until the end of the season, and the second one is to bring Pochettinho to Santiago Bernabeu next summer.

Real Madrid are aware as to how difficult it is to negotiate with the north London side, having signed Luka Modric and Gareth Bale in the past and Pochettino had no plans to leave them earlier in the summer as he had signed a new five-year deal.

However, it’s claimed the Argentine has secured a ‘commitment’ from Spurs chairman Daniel Levy to ‘free’ him, if the La Liga giants come asking him for again.

As of now, things are not going as per Tottenham’s plans as they may fail to qualify for the knockout stages of the Champions League, while they sit outside the top four in the league table.

Pochettino is said to be tired and disappointed at playing in front of a ‘half full’ Wembley and dealing with the pitch after NFL games.

His latest comments hinting that everything is not well for him at Tottenham could be an indication of his ‘stormy’ relationship with Levy and also the declaration that he wants to leave. 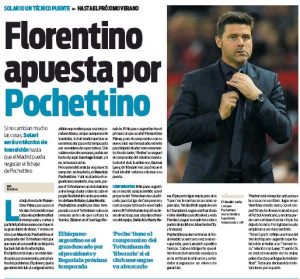 Perez will be hoping that his dream of having the Premier League manager to take charge of Real Madrid is fulfilled, but it is unlikely to happen until the start of the next campaign.