Home Europe “Then come to us… at Leeds” – Whites player jokes that European...
SHARE

Leeds United defender Robin Koch has given an interview to SportBild and it’s published in this week’s edition of the magazine.

One of the aspects the centre-back focused on was Borussia Dortmund’s Champions League quarter-final tie against Manchester City.

“At the moment, City are the best team in the world for me. They are currently playing at an absolutely top level,” he said.

“With Ilkay Gündogan there is also a German player who I not only value incredibly as a person: He is in fantastic form, one of the decisive players for Pep Guardiola.”

Marcelo Bielsa’s man is of the belief Erling Haaland’s presence can help the Bundesliga side overcome the Citizens in the European competition.

“Manchester City are probably the favourite. But BVB can surprise in one or two games. You have a great team with a lot of talent,” Koch explained.

“City’s defence has improved, but Erling Haaland can also push a ball in against City. Haaland has the killer instinct and the Champions League seems to give him a lot of joy.”

Haaland has been heavily linked with a move to the Premier League, where City, Manchester United and Chelsea are named as suitors. The Norway international’s father, Alf-Inge Håland, represented Leeds during his playing career. 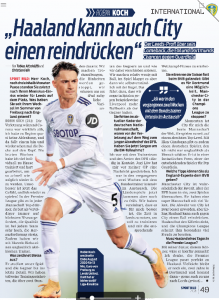 Koch joked about the possibility of the Dortmund star following in his dad’s footsteps to play for the Whites.

“With his stature, this body, he would be made for this! I think the Premier League is a perfect fit for Haaland. Maybe he will stay in Dortmund for another year or two and then come to us in Leeds (grins),” he concluded.