Home Europe “He could come back” – Agent has his say on Paul Pogba...
SHARE

It’s fair to say Paul Pogba didn’t have a great performance for Manchester United against Southampton at the weekend.

Having been on the bench against Young Boys, Pogba was given the start against a side in real trouble.

Saints are in the relegation zone and such is their performance of late, Mark Hughes was sacked on Monday morning despite getting a point against his former club.

Following the 2-2 draw there were several reports of renewed hostilities between Pogba and his manager Jose Mourinho. Those have, of course, made their way to Italy and specifically the media closest to Juventus.

Turin newspaper Tuttosport are utterly obsessed with the idea of the midfielder returning to Juve and have published several articles over the weekend on that subject.

They’re so dug in that they’re now even asking agents not involved in the potential return what they’d make of it. This isn’t altogether unusual for the Italian media, agents are often asked to pontificate on any number of things. 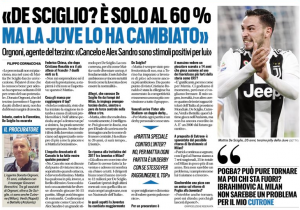 So, when speaking to Mattia de Sciglio’s agent Donato Orgnoni, they asked if he can see the transfer happening.

Orgnoni replied: “He could come back, but I wonder: then who will leave to make space?”

In itself, the comment isn’t a big deal, but it shows how much the story is being pushed in Italy, and any new Mourinho spat will only encourage things further.