Wednesday was a rather exciting day in the transfer rumour mill for Liverpool fans.

Coming off the back of their 2-0 win against RB Leipzig, the Reds’ supporter base were then gifted some hope in their club’s pursuit of Kylian Mbappé, whose contract at Paris Saint-Germain expires in 2022.

It came from Le Parisien, who stated Liverpool were ‘not put off’ by the €200m asking price set by the Ligue 1 champions for their star, as they ‘theoretically have the funds or a big investor backing them’.

Three other clubs were mentioned (Manchester City, Real Madrid and Juventus if Cristiano Ronaldo were sold), but Thursday’s edition of L’Equipe is a bit more conservative.

In their eyes, only two clubs are ‘susceptible to interest’ Mbappé, and they are Liverpool and the Spanish giants.

While Real Madrid are his ‘childhood dream’, they recall that John W. Henry left a great impression on the player’s family in 2017 when he took his private jet to fly them around the Nice bay for two hours while having a chat. 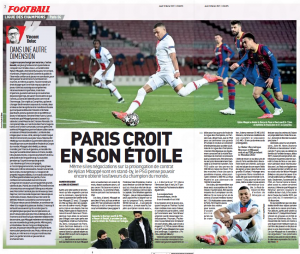 Liverpool are also sponsored by Nike, who have Mbappé under contract themselves, but while all this is positive, there remains a big hurdle: Paris Saint-Germain’s Qatari owners.

L’Equipe explain they ‘dream that Mbappé and Neymar still wear the club’s shirt for the 2022 World Cup, which will take place between November 21st and December 18th’.

For that to happen, both would need to extend their stay in Paris until at least 2023, which is a work in progress at this moment in time.

No one ever said it would be easy.