When Manuel Pellegrini was left without Łukasz Fabiański at West Ham, he had to turn to Roberto, who had recently signed from Espanyol on a free transfer.

Unfortunately, no one was prepared for how badly that would end up going, as the Spanish goalkeeper would concede 21 goals in 10 games, keeping just one clean sheet in a 2-0 EFL Cup win over Newport County.

Following that dreadful sequence that saw him dropped and replaced by third string keeper David Martin, Roberto was loaned out in January to Alavés to act as backup for Fernando Pacheco.

He has made three appearances so far, all coming since the return of football in June, and while they did beat Real Sociedad 2-0, they also lost to Espanyol 2-0 and got drubbed by Celta Vigo 6-0.

Pacheco then returned, but will be unavailable in the upcoming fixture against Granada, meaning Alavés will have to turn to Roberto once more.

West Ham have already agreed to let him stay until July 20th, but then comes the question of what happens next.

The player is contracted at London Stadium until 2021, and the Hammers also have an option to extend that deal by an extra year.

It’s fair to say that is very unlikely to happen, and El Correo in Spain explain there is the possibility Roberto could continue at Alavés.

They state the club’s sports director, Sergio Fernández, ‘has already left a door open for his continuity’ with the La Liga side.

Whether that is via another loan or a permanent move isn’t stated, but we’re guessing West Ham will take what they can get.

If that means sending him on another loan where they don’t have to pay his wages and simply let him leave on a free next summer, then they haven’t lost much, considering they got him for nothing in the first place.

Either way, Roberto doesn’t appear to have a future at West Ham, and Alavés could end up being his home for the foreseeable future. 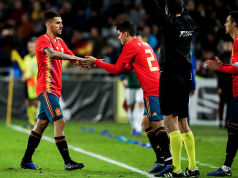 Middlesbrough ‘in the mix’ to sign defensive midfielder – Face important...