Some Manchester City fans will remember the saga involving Velez Sarsfield winger Thiago Almada back in the summer window.

The Portuguese press reported many times that Sporting would use a partnership with the Premier League side so they could sign the Argentine wonderkid.

It turned out that Almada ended up renewing his contract with Velez Sarsfield, but according to newspaper O Jogo today, the partnership between City and the Lions could still be on. 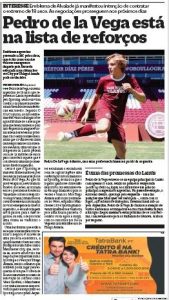 Lanus are said to be demanding €12m for the 18-year-old, and Sporting may not be able to afford that on their own.

That’s why they could use a method ‘like’ the one with Manchester City. It’s said that when Almada’s transfer collapsed, the clubs have kept ‘an open path’ for future deals.

Just like with Almada, City would pay for a bigger part of the transfer and then get the right to bring the player to England in the future.

So even though it’s not yet clear if it’s Manchester City who Sporting will use to try this signing, the Premier League side are seen as the most likely partners.