Atlético Madrid have secured Luis Suárez’s services and their ‘next goal’ is to sign Arsenal’s Lucas Torreira, according to AS.

It’s claimed contacts have continued for the midfielder, and all parties involved retain an ‘optimism in concluding the negotiation in a satisfactory way for all, but also conveyed caution’.

The La Liga side first need to make room in their squad, and they can do it by allowing Héctor Herrera to leave the club.

Atlético sporting director Andrea Berta is looking to take Uruguay international on a loan deal without an obligation to buy, and doesn’t want to compromise on this. The Gunners, however, would prefer to include a mandatory purchase option.

Arsenal paid €30m for Torreira in 2018, and they now value him at around €24m. Mikel Arteta’s side still have to pay €18m to Sampdoria, and therefore, they are looking to sell the 24-year-old for over €20m, to make capital gain.

The South American welcomes the possibility of joining Diego Simeone’s side, and has held talks with the Spanish club’s manager on three occasions. Arsenal would also welcome this move because the player is not included in Arteta’s plans. 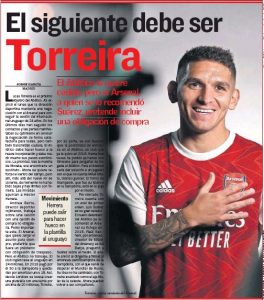 If Simeone’s side and Arsenal can find an agreement over the type of deal, then Torreira can complete a move to Atlético.