Real Madrid’s interest in Mauricio Pochettino ‘coincides with that’ of Tottenham Hotspur, reports AS.

Spurs are yet to appoint José Mourinho’s successor after sacking him in April, while Zinedine Zidane left Los Blancos after the 2020/21 campaign.

Pochettino is just five months into his job at Paris Saint-Germain and he’s now the ‘favourite’ candidate for the La Liga side.

The necessary contacts between the former Southampton manager and Real Madrid are already in place, and the latter are waiting for the Argentine to take the next step, by asking PSG to let him leave.

Although Real Madrid are aware it’s difficult to take the 49-year-old away from PSG, it could be made easier for them in the coming days, if Pochettino tells Nasser Al Khelaifi he wants out of the club.

AS explain it’s the only way the South American can manage Real Madrid and they will not be the first to enter into negotiations. The newspaper also points out the Premier League side’s interest in Pochettino. 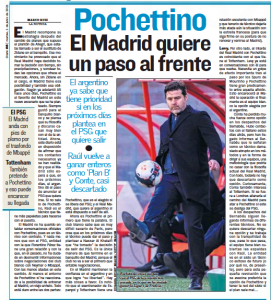 Daniel Levy is ‘already in talks’ to bring his former manager back to the club, and the Spurs chairman needs an important coup, like Pochettino, after passing on Mourinho.

Tottenham’s interest in Pochettino only makes it more expensive for Real Madrid to get him out of PSG.

In the event Real Madrid fail to appoint the current Ligue 1 coach, AS add Raúl has been identified as a ‘plan B’ at the Bernabéu.