Over the weekend, the Mirror reported Barcelona presidential candidate Joan Laporta has made Arsenal’s Héctor Bellerín a main transfer target, if he gets elected.

It was also explained Laporta has held talks with the right-back’s camp, and the 25-year-old is open to the idea of returning to the Catalan club, but only after the end of the season.

The Mirror added a ‘figure just north of £22m’ has been discussed.

The above claims have been discussed in today’s edition of Sport, and the newspaper provides background on the La Liga side’s ‘ancient interest’ in the defender.

It’s claimed the Spain international’s name has been handled by the Blaugrana’s sports management for ‘several years’, but the north London club’s ‘high financial demands’ made it difficult to complete the deal.

The report further adds the ‘panorama’ of the Gunners has ‘changed significantly’, suggesting Barca may have a chance to take Bellerín in 2021.

The poor form and results from this season and ‘instability’ over Mikel Arteta’s future at the Emirates would have convinced Arsenal owners to consider ‘remodelling of the sports project’, and therefore they will be willing to allow some players to leave, including Bellerín.

These factors would make the fullback’s exit from Arsenal ‘much easier’, despite him having a contract until 2023. 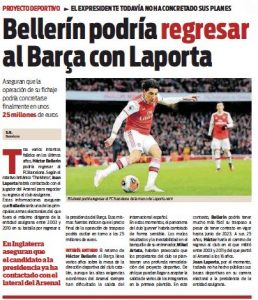 Sport mainly focus on what happened in past and why it would now be ‘much easier’ for Barcelona to take Bellerín.