Unceremoniously subbed off 18 minutes after coming on against Manchester United, Moise Kean’s time at Everton has been anything but happy so far.

The young Italian has yet to find the back of the net since his €30m transfer in the summer, and the latest incident will have done anything but provide him the boost in confidence he so sorely needs.

The potential arrival of Carlo Ancelotti could change all that, of course, but if it doesn’t, a loan back to Serie A could help solve a few issues, at least temporarily.

That’s what Roma could be hoping to pull off, as Corriere dello Sport explain the idea of using Kean as a backup for Edin Džeko ‘remains plausible’, especially since he can also be used alongside the Bosnian if needs be. 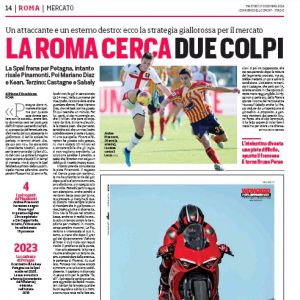 The biggest issue, as has been the case in the many articles we’ve done on the subject in the past, remains the finances required to pull off such a move, as Everton won’t be willing to part ways with a player they spent so much money on so soon after acquiring him.

A loan remains the likeliest outcome, but only ‘as long as the mandatory purchase clause isn’t too greedy’.

The kind of figure they are hoping for isn’t revealed, but our guess is it’ll be somewhat lower than the €30m paid by Everton in the summer, and we doubt Marcel Brands and co. would agree to that.