Girona have already travelled to England and are using Manchester City’s facilities for preseason training.

Last week, we carried a report from AS, who explained Girona’s sporting director Quique Cárcel will travel to Manchester to help his side sign players from City.

Wednesday’s edition of the same newspaper claims the second division Spanish club are targeting four new additions to their squad in the ongoing transfer window.

Girona’s ‘idea’ is to sign two of those four players on loan from the English club, but there’s no mention of the players they intend to land.

The clubs have close ties as the owners of the Premier League champions, City Football Group, also co-own the Spanish side.

The relationship between Girona and City could be vital in helping the former to sign the two players on loan from the English champions.

Aleix Garcia and Douglas Luiz were two of the three City players who spent last season on loan at Girona. 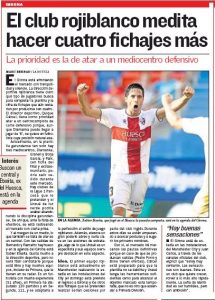 The Brazilian has been strongly linked with Aston Villa and Diari de Girona reports it remains to be seen what City’s plans are for the duo.

Garcia is currently part of City’s preseason squad, but it’s unlikely he will be included in Guardiola’s plans for next season.

The third player Girona had was Patrick Roberts, and given he’s now at Norwich City, a return is out of the question.