Less than six months after he arrived at Southampton, Guido Carrillo joined Leganes on a season-long loan deal last summer.

The La Liga side have been interested in bringing the forward back to the club on another loan deal.

AS reported on July 8th that Ralph Hasenhüttl’s side were only considering allowing the Argentine to leave on a permanent transfer and the Saints tough stance had left the 28-year-old in ‘limbo’ . He was also left out of the club’s preseason tour to Austria.

The Argentine has still not managed to get a move away from St Mary’s Stadium.

With less than two days left before the new La Liga season kicks off, today’s edition of AS takes a look at the business left, both in terms of incomings and outgoings for each club. 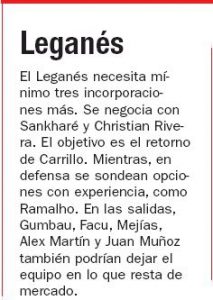 It’s claimed that Leganes are looking to make three more additions to their squad and one of them is the Southampton player. Their ‘goal’ is the ‘return’ of Carrillo.

AS’ report doesn’t provide any additional details and neither do they specify if Leganes’ idea is to sign the player on a loan deal or a permanent transfer.