There appear to be some conflicting messages going around regarding the future of Borna Barišić, currently contracted to Rangers in Scotland.

The left-back, who was having a tremendous season under Steven Gerrard until all sporting events were suspended, has been linked with a move away from Ibrox in the summer, and the speculation wasn’t helped by his agent, who appeared to be offering him around.

A couple of Italian clubs were said to be interested, mostly AS Roma and Napoli, although later reports suggested the latter had ‘other priorities’ to focus on and Barišić wasn’t even ‘second’ on their list.

Well, fast forward to Tuesday, and Gazzetta dello Sport believe differently, explaining that while the Croatian isn’t top of the pile, he very much remains an option. 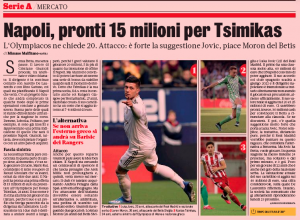 The main player Napoli are focusing on is Olympiakos’ Kostas Tsimikas, but Cristiano Giuntoli, the club’s director of football, is also said to be ‘remaining in contact with Rangers for Borna Barišić’.

They reckon his transfer would cost around €7-8m, which would see Steven Gerrard and co. make a profit of around €5m in just under two years.

We’ll have to wait and see what happens, but the latest outing from his agent did suggest the 27-year-old was currently committed to Rangers for the foreseeable future, perhaps having been told off by the Rangers brass about his previous comments.

Claims from Spain that Bruno Fernandes could sign for Barcelona, and not Manchester United