The Inter director of football was reported to have been keeping an eye on players such as Serge Aurier, Ilkay Gundogan and Christian Eriksen on Tuesday, and his Wednesday trip to the north of England has also sparked one or two articles.

Leggo on Thursday believe his presence at Old Trafford was down to two players: Romelu Lukaku and Ivan Rakitic.

This shouldn’t come as a surprise considering the Manchester United forward has been touted for a month or so as a potential replacement for Mauro Icardi, should the Argentine be sold in the summer and Antonio Conte take over from Luciano Spalletti. 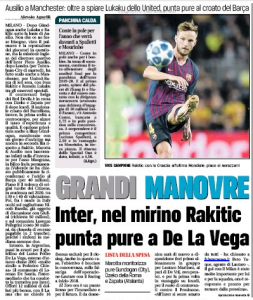 Starting against Barcelona on Wednesday night, Lukaku did as best he could in a game where clear cut chances were at a premium, but fulfilled his target man role well, holding up the ball when needed to try and bring in those around him.

As for Rakitic, the Croatian was kept fairly quiet, seemingly more focused on defensive phases than taking part in his team’s attacks.