Earlier on Thursday, we covered the latest from the Italian websites regarding Chris Smalling and a potential return to AS Roma.

The base argument was that the Serie A side were going to make a new offer to Manchester United for their player, and it was going to be closer to what Ed Woodward was asking for.

There was also talk of the intermediary in the deal, Jozo Palac, would travel to Rome on Thursday to ‘close the operation’.

This is backed up by Corriere dello Sport, who explain this all comes after Guido Fienga, the Italian club’s CEO, and their general director, Manolo Zubiria, travelled to London on Wednesday to hold talks with Ed Woodward.

In fact, it’s stated the pair ‘have almost convinced’ the Manchester United director to sell Smalling at a ‘sustainable price’ of ‘€15m including easy bonuses’. 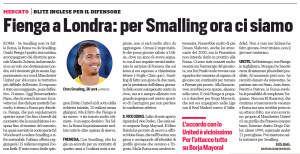 It’s not done yet, but there is a reported ‘optimism’ coming from Fienga after his travels, knowing full well that talks with the player himself have long been agreed over a €3m/year deal.

So much so that Corriere speculate it will be ‘improbable’ of the defender to play on Saturday against Udinese, but any game beyond that should be fine for him to play in.

We’ll warn you this isn’t the first time there’s been so called optimism in this deal, but with the transfer window closing soon and Manchester United seemingly happy for Smalling to not be a part of Ole Gunnar Solskjaer’s plans, a late agreement would make the most sense for all involved.