On November 1st, Tahith Chong’s agent Erkan Alkan made it clear that Manchester United either hadn’t yet offered the player a new deal, or hadn’t convinced him about his progression.

The 20-year-old’s current deal at Old Trafford will expire after this season and he’s so far not signed an extension with the Red Devils.

Juventus have been credited with an interest in acquiring the Dutchman’s services.

Italian newspaper Tuttosport explains the wideman could make a switch to the Turin club ‘soon’ (after this season) as they look to conduct a Pogba-style operation.

Juve signed Paul Pogba on a free transfer in 2012.

It’s claimed the Serie A winners would be ‘very close’ to signing an agreement with Chong so that he can join the Old Lady as a free agent next summer. 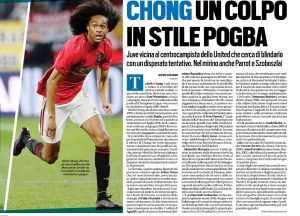 The potential operation is considered as a big boost for Juve, not only because it’ll be a free transfer, but Chong is ‘unanimously considered one of the most interesting profiles’ in Europe.

Tuttosport adds the player’s future will depend on him and his agent, Alkan.