It wouldn’t be a day of the week ending in y if there wasn’t an update on Chris Smalling’s situation in the Italian media.

Gazzetta dello Sport were the culprits on Tuesday, explaining the defender still hadn’t made up his mind about whether or not he wanted to stay at Roma.

He’s talked about returning to Manchester United in the past, but Corriere dello Sport on Wednesday think things are slowly changing, as Smalling has ‘slowly started to understand he is very important for the team and is reviewing his certainties’.

At club level, it’s stated Roma are ‘working’ with the Old Trafford board in Manchester in order to ‘guarantee’ the centre-back’s future. 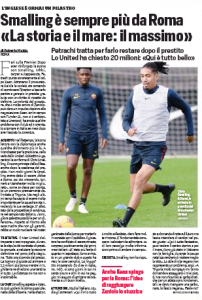 That follows from Il Tempo on Tuesday claiming Smalling’s agent had travelled to Rome to talk to the player, so if both are to be believed, there’s action going on both fronts.

So far, the Serie A side are looking to offer €12m + bonuses, while United want €20m or so, which is a distance that is ‘not insurmountable’ albeit annoying.

For now, Smalling is said to be ‘waiting’ and is enjoying the love of Roma fans for the time being, as he focuses on doing his best for his loan club.