Left out of Chelsea’s squad to face Manchester United at the weekend, Davide Zappacosta had to watch his side succumb to a 4-0 defeat from the stands instead.

The right-back saw César Azpilicueta return to his natural role under Maurizio Sarri, where he has remained since Frank Lampard took over, and once Reece James returns from injury, things could get even more complicated for the Italian.

That’s why there’s talk of him, once again, returning to Italy, where AS Roma are thinking of bringing him in to fill the void left by the departure of Rick Karsdorp.

Needing depth in the role, the Italians, according to Corriere dello Sport, are ‘working’ on a loan with a view to buy for the former Torino star, who only made 17 appearances in all competitions last year, with most coming in Chelsea’s successful Europa League campaign. 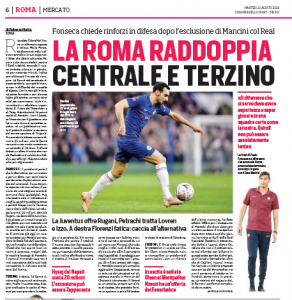 Roma also looked at signing Elseid Hysaj from Napoli, but their rivals’ demands of €20m put them off quite quickly.

For Zappacosta, this could be the ideal situation to get some minutes under his belt, especially if he can impress and then guarantee himself a permanent transfer back to his home country, killing two birds with one stone along the way.

“It stinks” – Watford ready to ‘assert their rights’ over transfer...