What a strange season Alexis Sánchez has had.

Unwanted at Manchester United, the Chilean was sent to Inter, where Antonio Conte wanted to try and help him get his career back on track.

Unfortunately, injuries got in the way, and while the Covid-19 pandemic was a frustration for most, it might have been a blessing in disguise for the forward.

Everything he has done since returning has impressed those around him, to the point where Inter are now trying to put something together in order to keep him beyond the current season.

Basically, what seemed like the impossible could become reality in the near future: Sánchez might stay in Italy. 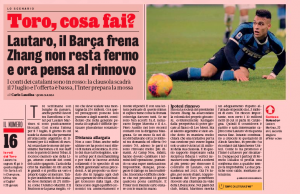 It’s explained by Gazzetta dello Sport his ‘stock’ within the Serie A side ‘continues to grow’, and since Conte has ‘promoted’ him, Inter are now ‘at work to try and redeem him’.

That’s all the detail we get for now, but we all know what will need to happen before this ever takes place: Sánchez will need to lower his wages.

But if he does, and it will be interesting to see whether he favours money over game time, then Manchester United could end up being rid of a very expensive mistake in the coming months.