Earlier today, we’ve covered the not so optimistic news from Portugal regarding Manchester United’s chase for Alex Telles.

Newspaper Record said nothing is happening right now, and A Bola claimed Porto continue wait for the Red Devils to increase their bid for the left-back. They’re reportedly offering €15m, while the Liga NOS side want at least €20m.

And it seems the Dragons won’t let things continue until the last minute, at least according to what local Porto newspaper O Jogo writes today.

They say this is a ‘decisive week’ for the player’s future, because the Portuguese side ‘won’t wait much longer’ to receive a ‘satisfactory proposal’ from Manchester United. 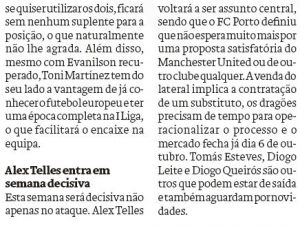 O Jogo writes that Porto would have to sign a replacement for Alex Telles, and that would take some more time. The Portuguese transfer window closes on October 6th.

So if Manchester United’s plan is to hold it until the last minute to see if Porto will give in to pressure, it seems there’s a good chance the Red Devils could end up empty handed.

However, despite that, as long as they offered enough by, say, Saturday, it must be considered likely Porto will accept.

“I didn’t have opportunities” – Player gives his side on why...