Arvin Appiah came up through the ranks of Nottingham Forest’s youth system before making it to their first team last October.

The winger signed a new deal with the Championship side earlier this year, but it looks like his future could be away from the club.

Over the weekend, some members of the English media reported that second division Spanish side Almería are interested in the 18-year-old and have already agreed an £8m deal for the transfer.

This has been relayed in today’s edition of AS and they further explain the player has arrived in Spain to join his new teammates.

Almería manager Pedro Emanuel was looking at bringing in a new No 9 or No 10, but the club’s technical secretary has decided to strengthen the right wing. 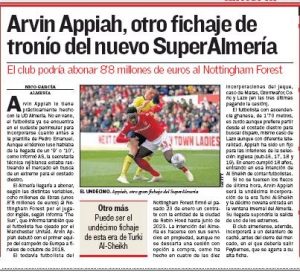 Though Almería’s intention is to sign Appiah on a permanent transfer, a loan deal with a purchase option can’t be ruled out, as they have done with a few other deals.

Almería are starting a new era under the club’s new owner Turki Al-Sheikh and if there are no last minute surprises, the Nottingham player will be their 11th signing of this window.