It looks like Portuguese giants Benfica, Porto and Sporting all have the same mission in the January transfer window, and that’s to strengthen their defensive sector.

As written by newspaper Jornal de Notícias, each of those clubs are looking for new centre-backs, and already have some names on their wish lists.

In Sporting’s case, one of the targets could come from the Premier League. That’s Lyanco, who just a few months ago joined Southampton in a move from Torino.

The 24-year-old wasn’t able to have much playing time with the Saints, and is now about to be chased by the current Portuguese champions. 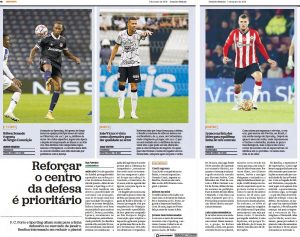 Jornal de Notícias say Lyanco is an ‘old dream’ of Sporting, with the Lions ‘keeping an eye’ on the player because things ‘haven’t been going according to expectations’ at Southampton, where he’s only made 10 appearances this season so far.

It isn’t clear if the Lions would like to sign the defender on a loan or a permanent deal, with the newspaper claiming the Lisbon side would only accept to negotiate his arrival if for ‘low cost’. So the chances of a transfer should be down to the Saints’ opinion on letting him go so soon after his arrival at St. Mary’s.

‘Still no movement’ – Man United man’s future up in the air, agent has received ‘no signal’ from club

“He needs to come back” – Arteta says he wants player at Arsenal next season, now has ‘experience’ required

‘Still no movement’ – Man United man’s future up in the...

“He needs to come back” – Arteta says he wants player...