With the title race in the Turkish League coming down to the wire, Galatasaray’s Garry Rodrigues has delivered when the team needed him most.

The Newcastle United and West Ham United target was outstanding during Galatasaray’s win against Akhisarspor at the weekend, scoring both goals in his side’s 2-1 victory.

Fanatik report scouts from Newcastle United, West Ham and Lyon were present at the game on Sunday, and all three clubs will have been impressed with the Cape Verde international.

The Turkish newspaper also claim Galatasaray’s board will be willing negotiate deal with clubs for Rodrigues, but it’s going to take big offer to sign the winger. 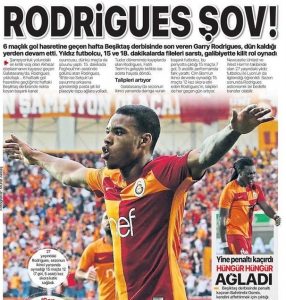 The Turkish newspaper expects transfer talks will begin shortly after the season ends and it’s likely Newcastle United and West Ham will be in the mix to sign Rodrigues.

Newcastle United have already had two bids rejected for the Galatasaray star, whilst more recently there were claims West Ham have also tabled an offer for the 27 year old.

The Hammers were said to have offered €12m in March, ahead of the summer, and Newcastle bids came in the past two windows, with another expected this time.