The Istanbul side won both the Super Lig and Turkish cup last season and the Leicester City loanee was instrumental in their success. However, with reports claiming Ghezzal is attracting interest from other clubs, such as AS Monaco, Besiktas could look elsewhere, with Townsend said to be an option.

Townsend’s contract with Crystal Palace will expire at the end of next month and Takvim report this attracts Besiktas as they are looking mainly to bring in free transfers this summer because of their poor financial situation. The player has gone on record to say he’s had interest from clubs in Europe, with a new adventure possible. 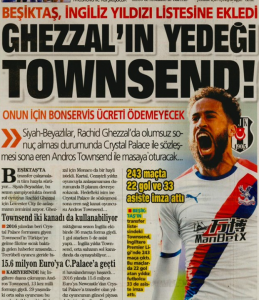 It’s reported the Istanbul side’s intention is to keep Ghezzal with reports that they are in talks with Leicester City over a new deal.

The 29-year-old made 34 appearances for Palace in the Premier League last season, scoring one goal and providing five assists.