Over the weekend, there were claims from England of Liverpool interest in Barcelona youngster Gavi.

The 17-year-old has come through the ranks at the Camp Nou, and despite his young age he’s been a regular this season, with 26 appearances during the current campaign. Remarkably, he’s also a senior international, and is the youngest player ever to represent Spain.

Barcelona have Gavi on a contract which lasts until June 2023, and that means they need a renewal soon if they’re to avoid him entering the final year of his contract.

There’s confidence the midfielder sees his future with his boyhood club, yet claims from England still bring some worry.

Mundo Deportivo cover English claims, and an apparent ‘insistence’ from Jurgen Klopp over signing the player. Gavi has a termination clause of €50m, which isn’t a prohibitive amount for a youngster rated so highly. 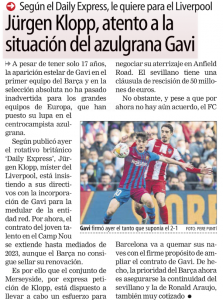 The Catalan newspaper, in response to the claims of Liverpool interest, say Barca will do everything in their power to extend the contract, increase the clause, and therefore keep Gavi away from Liverpool and others.

Mundo compare the situation to that of Ronald Araujo, another Barca player with a contract ending in 2023, who is also being linked with Liverpool.