When they triggered the one year contract extension in Toby Alderweireld’s contract, Tottenham accepted the fact he would likely leave during the summer of 2019 for €25m.

The release clause was one of the conditions that came with the 12 month prolongation, and while no one has paid said amount just yet, offers are expected to roll in once the season is over.

That is why Spurs are looking around Europe for his replacement, among which has been, for quite some time now, Sampdoria’s Joachim Andersen.

The stories started back in September 2018, and the amount back then to sign the Denmark international was around €25m, the same as Alderweireld’s release clause.

Sampdoria refused to let their starlet go midway through the season, and further speculation has caused the price to increase, with Corriere dello Sport claiming on Tuesday the minimum the Serie A side will let him go for is €40m. 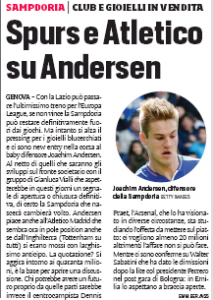 The fact Atlético Madrid, who have to replace Lucas Hernandez (heading to Bayern Munich for €80m), have joined the party hasn’t helped either, and the Spaniards are ‘seemingly in the lead’.

Tottenham are still firmly in the mix, however, and are the only Premier League club named, despite the Dane being looked at by others in England’s top division.

What seemed like a relatively easy deal to complete a while back has become considerably more difficult, meaning Mauricio Pochettino and Daniel Levy might have to turn their charm up to 11 to get their man.