Lille have become the latest club to join the race to sign Barcelona’s Malcom, according to beIN Sports as relayed by Sport.

It’s claimed the Ligue 1 runners-up will have to ‘compete’ with the likes of Tottenham Hotspur, Arsenal, AC Milan and Inter Milan for the Brazil international.

Spurs are ‘interested’ in the 22-year-old, but the report doesn’t explain which club is leading the chase to sign him.

It’s not the first time interest from Mauricio Pochettino’s side has been discussed, especially by Sport.

Last Friday, we carried a report from the same newspaper, who explained that Tottenham are after Malcom.

It was claimed that amid interest from elsewhere, the winger prefers to make a switch to the Premier League, where he is receiving attention from the Champions League finalists. 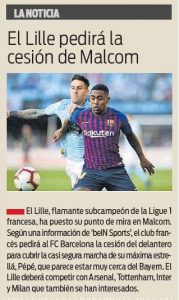 Sport had then reported the efforts from Spurs in signing the Sao Paulo born player as not advanced, but they are ‘interested’ in him, which has also been cited in today’s edition of the Catalan newspaper.

Malcom has been restricted to eight starts across all competitions in his debut season with the La Liga winners.