On August 21st, Soccer Link reported Victor Wanyama was ‘very close’ to joining Club Brugge and only a ‘few details’ still needed to be sorted out for the deal to take shape.

Brugge’s financial model and a father-son relationship between their manager Philippe Clement and Wanyama, has opened the door for a possible transfer. The two played alongside each other at Beerschot AC between 2009 and 2011, and had established a good bond.

HBVL explain Brugge are prepared to make a €10m bid, rising to €12m including bonuses, but Spurs are demanding €12-15m. There is a belief the transfer is possible, if the Belgian side can find an agreement over wages with the player.

Brugge are unbeaten in the league this season, having won three of their first four matches, and are in contention to qualify for the Champions League group stages. 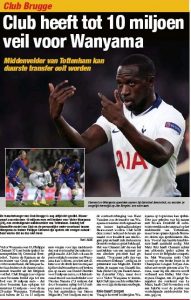 They want to reward their manager for the impressive start of the season, and do that by signing Wanyama.

The Spurs midfielder has struggled with injuries for the past two years and Brugge are concerned over how many matches can he can play at the highest level.

Should the deal go through, Wanyama will become Brugge’s club record signing.