On Monday, Corriere dello Sport published an article regarding Henrikh Mkhitaryan’s situation and his future at Arsenal.

The Armenia international is currently on loan at AS Roma, who, despite his injuries, have been impressed enough with his performances when he’s been fit to consider keeping him even longer.

Corriere believed Arsenal were asking for around €24m, but the Italian side were only prepared to offer €15m + €2m in bonuses for the time being.

Well, Gazzetta dello Sport have their own slant on the situation on Tuesday, and they start off by explaining Roma, amid the Covid-19 outbreak, are ‘planning their strategy for the future’, which includes keeping Mkhitaryan.

However, they aren’t looking to buy him outright just yet, as Gianluca Petrachi is, through Mino Raiola, trying to renew the ‘paid loan’ for an extra year.

There are problems with this, as the Armenian’s contract with Arsenal runs out in June of 2021, meaning that in its current state, a loan wouldn’t be possible.

That’s why Raiola’s strategy is to try and get the Gunners to renew his deal with a lower wage than he currently earns in order to allow that loan extension. 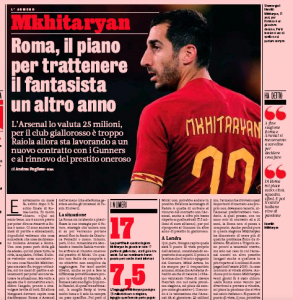 Then, there’s Arsenal’s view on the matter, as Mikel Arteta hasn’t dismissed the possibility of Mkhitaryan returning and playing for him once the current campaign is over.

If that doesn’t happen, there’s also the prospect of selling him, with a valuation of around £23m; an amount the London club could certainly do with.

Right now, however, Roma would only keep him if they can renew the loan, as they seem reluctant to match Arsenal’s asking price.

At least, that’s what Gazzetta dello Sport are pushing on Tuesday.