Tuesday’s edition of Corriere dello Sport has a big article explaining how much Roma loves Chris Smalling and how much he’s enjoying the city and club in return.

Talks with Manchester United are ongoing for a permanent deal and there’s confidence things can be agreed before Christmas, but Corriere didn’t provide any figures.

Il Messaggero do so, and the amounts don’t sound great for the Premier League club.

To begin with, they go over Smalling’s big 30th birthday party, held in a villa on the outskirts of Rome, suggesting that could be another sign of his love for the city.

The defender’s impact has been so good that Roma fans are said to have ‘forgotten Manolas’, who moved to Napoli for €34m in the summer window.

Smalling’s agents arrived in Italy on Monday to try and help build a deal, and Roma are offering €12m. There’s less than two years between the United owned defender and Manolas, and given the levels they’re currently playing at, the gap in transfer fees is huge.

Manchester United are said to be asking for €20m, which seems entirely reasonable, yet Roma would try and drag that down to €18m, which in itself would actually be €15m plus more in bonus payments. 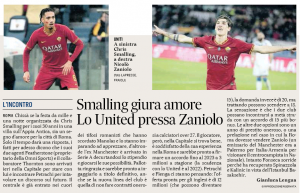 Nicolo Zaniolo could come into the deal, but only on the basis of a first option for United should Roma decide to sell in the future.

Given such options are often useless in practice, the whole deal isn’t sounding great for the English club.