It’s no big secret that Benfica like to protect their young players with huge release clauses, and once one of their yougsters starts getting the attention from big European clubs, these clauses go even higher.

This is the case of midifelder Florentino, who has recently been linked to Manchester City.

Newspaper Record brings a story today saying the Eagles will open talks to give the player a new contract.

Florentino is currently protected by a €60m release clause, and Benfica want a meeting this weekend to offer him a pay raise with the conditions of increasing his price tag to €100m.

Regarding the chase for Florentino, A Bola names Real Madrid, Manchester City and Borussia Dortmund as the clubs who have been making approaches for the 19-year-old. 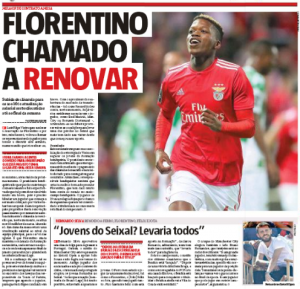 This Tuesday, when interviewed by the Portuguese press, Manchester City midfielder Bernardo Silva named Florentino as one of the players from Benfica’s academy who he would like the Premier League club to sign.

But it looks like Pep Guardiola’s side will have a hard time in case the teenager agrees a new contract.