The last we heard from Matt Miazga, Turkish club Goztepe were trying to sign him after their manager Tamer Tuna made the United States international his priority this summer, but here we are almost a month later and nothing new has happened, suggesting this one isn’t going to happen.

However, the Chelsea defender might find himself in Italy next season if Corriere dello Sport are to be believed, as Fiorentina have taken an interest in his services.

The reason? Because he’s American.

Recently bought by Italian American billionaire Rocco Commisso, Fiorentina are now trying to grow their market in the United States, and the easiest way to do this would be to buy one of their national team players.

The new owner has made it clear he wants an American in the squad, with the first choice being Timothy Weah.

Unfortunately, the exciting forward headed to Lille for £9m instead, forcing the club to move down their list to Columbus Crew defensive midfielder Wil Trapp, but the fact he is currently playing in the MLS makes the transfer ‘a gamble’ as there’s no guarantee he will adapt to a ‘tougher’ league like Serie A. 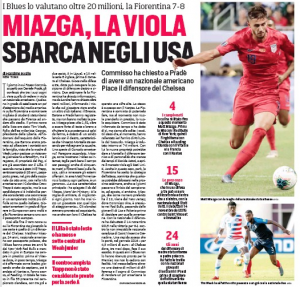 Finally, we reach Chelsea’s Matt Miazga, who endured a difficult first half of the 2018-19 campaign at Nantes in Ligue 1 before being sent back to Stamford Bridge in January.

A second loan to Reading was organised, which went a bit better as he started all 18 Championship games for the Royals.

Now back at Chelsea, the 23-year-old will need some game time to continue his development, and Fiorentina decided to enquire a couple of weeks ago about his situation.

The answer they received shocked them a bit, as the Blues told them Brescia were also keen and that they would require €20m to let him go.

Fiorentina, down their end, reckon he’s only worth €7-8m, and they are prepared to wait in hope Chelsea will lower their demands as the transfer window goes on.

In their eyes, Miazga would give Vincenzo Montella the ‘technical defender’ he has been looking for on the pitch all the while opening a door for Fiorentina on the American market.