One of the main stories of the summer, Romelu Lukaku to Inter ended on a positive note for all parties, with the Belgian getting his Old Trafford exit, Manchester United the money they wanted and Antonio Conte the marquee striker he so desired.

However, it appears the two clubs aren’t quite done holding talks this summer, as Alexis Sánchez is now of interest to the Italian side, pushed to one side by Ole Gunnar Solskjaer, even if he publicly states otherwise in press conferences.

The Chilean hasn’t been the success story everyone hoped him to be, scoring just a handful of goals since his switch from the Emirates, and with high wages many feel he no longer deserves, United probably wouldn’t mind having him off the books.

Gazzetta dello Sport have a big feature on the negotiations on Monday morning feeling very confident about the whole matter, explaining Sánchez ‘will return’ to Italy eight years after leaving when he swapped Udinese for Barcelona back in 2011. 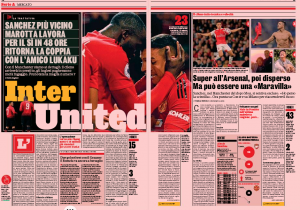 Inter’s decision to move for the forward came after Roma rejected yet another offer for Edin Dzeko, as Beppe Marotta and Piero Ausilio working with the Chile international’s agent, Fernando Felicevich, currently in London to simultaneously hold talks with Manchester United.

The ideal scenario would be for the ‘white smoke’ to happen in the next 48 hours so as to integrate Sánchez into Inter’s squad as quickly as possible ahead of the new Serie A season kicking off next weekend.

The 30-year-old gave his green light for the move on Saturday, agreeing to reduce his wages, which led to the Italians deciding to put the Dzeko money on the forward.

Inter would be prepared to buy Sánchez after an initial loan period, putting €2-3m up front for the temporary deal, which would include a view to buy at €12-15m, while Manchester United would pay half his wages for the duration of the first year (loan period).