Earlier today, we covered a story from the Italian media regarding Tottenham’s pursuit of Milan Škriniar.

The Slovakia international has become Spurs’ number one target to reinforce their defence, and it was stated by Calciomercato that a bid was to be ‘expected’ from the London side.

However, there was no indication as to when that would come, but Gazzetta dello Sport and Corriere dello Sport have taken care of that.

According to the first of the two, the situation stands as such: ‘a new meeting will not be necessary because a conference call and the right numbers will be enough to make ends meet’.

The belief is the ‘drop point could be €40m + bonuses’, and with the player having already said ‘yes’ to Tottenham, an agreement on the price should see the transfer breeze through the required protocol.

This is backed up by Corriere dello Sport, who go into more detail, believing that Inter are ‘waiting for an official proposal in the next few hours’. 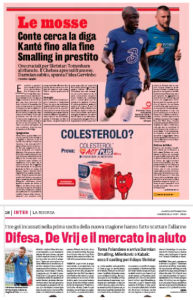 The Serie A side have told their English counterparts ‘they do not intend to drop below €50m’, but Spurs are not expected ‘to go beyond €35m’.

It’s short of the mark, ‘but with the addition of a series of bonuses, they could really get close to the Nerazzurri demands’.

We’re entering the end game now, and it will be interesting to see what kind of tricks Daniel Levy has up his sleeve to ensure he gets what he wants without giving in too much to the Italians’ demands.