If you’ve been regularly visiting our website to keep up with Watford’s transfer news and their 137 loans around Europe, then you’ll also be aware of the situation surrounding Robin Olsen.

We’ll spare you the more boring details, as we’ve repeated them time and time again, but, in short, Roma want rid of the Sweden international after a relatively poor season and the Hornets are reportedly in talks with him.

There’s definitely a good goalkeeper there, but it simply didn’t work for the 29-year-old in Italy, perhaps feeling the pressure of succeeding Alisson between the sticks.

A move to Watford could be easier to digest, seeing as (and this is by no means a dig) Ben Foster isn’t quite on the same level as the Brazilian. 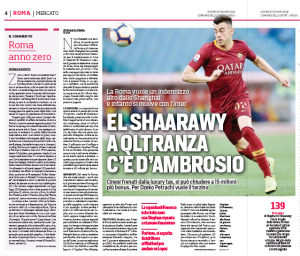 It was reported on Wednesday afternoon that Olsen had an offer from Watford in front of him, and Thursday’s Corriere dello Sport provide a small update, explaining the Swede is negotiating with the Premier League side.

However, Roma can’t do anything to replace him without the funds from his sale, so they’re having to wait for his ‘yes’ before making moves to that end.

And just in case you were wondering, they’ve targeted Real Betis’ Pau Lopez as the man to follow in Olsen’s footsteps.