We’ve already covered the future of Chelsea’s Tiemoué Bakayoko numerous times, especially since Milan have made it their objective to bring him back to the club.

The Frenchman spent a successful season on loan there, and the Serie A side haven’t forgotten what he brought to the table as they look to strengthen their midfield for the upcoming season.

TuttoMercatoWeb recently got in touch with the player, who made it clear that while he was still a Chelsea player, he also held Milan close to his heart.

That suggests he wants to return, and backs up previous claims he had already said yes to a move, meaning all that was left was for the Blues and Milan to find an agreement.

This was always going to be the toughest part, as Marina Granovskaia will want to make as much money back as possible on a player they originally spent €40m or so on.

Corriere dello Sport on Wednesday state Chelsea have, for the time being, asked for €23m, which is still a bit much for the Italians. 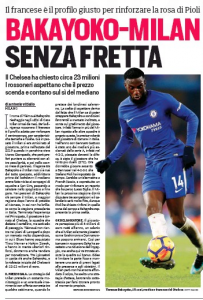 They know the midfielder wants to join them, so they are hoping to use that to their advantage, planning on ‘constantly monitoring’ the player’s situation and potentially coming forward with a ‘concrete offer’ in the next few weeks.

By that point, they’re hoping Chelsea, wanting to get rid of an expensive flop, will have lowered their demands a bit.

Down his end, Bakayoko has said he’s happy to lower his wage demands, but there is still work to be done on how his bonuses will be worked out, as Corriere explain they likely won’t be ‘fixed’ and more aimed towards the number of appearances and team objectives.

We might be getting somewhere here, but it’ll just take time.