After reports from the French media on Monday, it’s now the Portuguese press who writes about Porto’s interest in the Celtic midfielder Olivier Ntcham.

Newspaper Record backs up the information saying the midfielder is on top of manager Sérgio Conceição’s wishlist, and the Dragons will make some efforts to get the player.

But despite the interest and some contact with the player’s entourage, Porto must wait to see what happens with Celtic’s Champions League campaign.

In case the club get knocked out tonight, then it’s much more possible that Ntcham is sold. In case they go through, then the Scottish side are more likely to keep him. 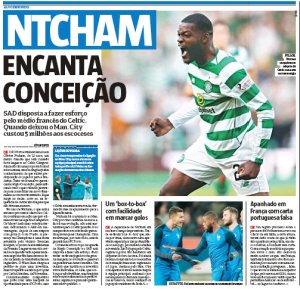 Record claims this is the reason why West Ham United couldn’t sign the player before the Premier League transfer window was closed, with the Hammers going for Carlos Sanchez from Fiorentina instead.

Still regarding Porto, Record says that the Celtic player is keen on making the move, and the Portuguese side know the effort would be worth it as Ntcham could mean a good profit in the future.

But first, Brendan Rodgers’ side need to play AEK Athens.