Celta Vigo are in the market looking for a new midfielder after allowing Stanislav Lobotka to join Napoli this month.

Over the past few days, reports coming out of Spain have talked about Southampton’s Oriol Romeu as a target for Celta and it was explained he is ‘seduced’ by the idea of joining the La Liga side in January.

Monday’s edition of Mundo Deportivo has a short report on the former Chelsea man and his possibility of joining the Spanish side.

It’s claimed the Vigo club ‘wait for’ the 28-year-old’s arrival in the winter market. While discussing about incoming targets, Romeu and Real Betis’ Cristian Tello are mentioned.

Regarding the Saints player, the Catalan newspaper adds Romeu could reach Celta ‘immediately’ as the operation to complete his transfer can be made official this week. 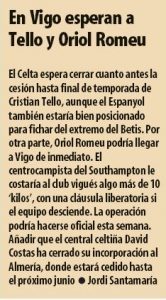 The midfielder would cost Celta little more than €10m, which is believed to be his release clause in the event the Premier League side are relegated.

Southampton are 13th in the table with 28 points and are six points ahead of 18th place Aston Villa, so relegation doesn’t seem the threat it once was.