Takvim report Galatasaray will wait until the end of the season before making a decision over signing Bournemouth attacker Ryan Fraser.

The Turkish side are currently sitting 3rd in the Turkish Super Lig, four points behind league leaders Trabzonspor and it’s reported that Gala will shape their transfer budget in accordance with their final league position.

If they win their 3rd straight Turkish Super Lig title, they will reportedly target players such as Fraser, and will be hoping they can lure him with the prospect of Champions League football.

It’s reported signing the 26 year old would be a fantastic move for Galatasaray but the move is likely to depend on their CL qualification for next season. 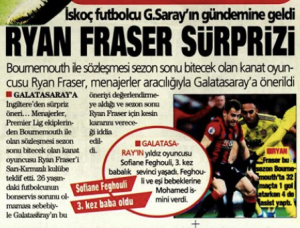 Yesterday we covered reports from Turkey that the Bournemouth player is a target for the Istanbul club, with the club’s manager Fatih Terim said to be impressed with him.

Fraser has yet to sign an extension with Bournemouth, and he’s free to speak to overseas clubs with regards to a pre-contract agreement.