Manchester United have managed only one win in the last four matches and this includes a 3-1 defeat against Chelsea in the FA Cup semi-final.

Ole Gunnar Solskjaer has largely used the same set of players in his starting lineup in the league, and the recent dip in results gives an indication that his side lack squad depth.

The Red Devils have been linked with a handful of players across various positions and one of them is Watford left-back Pervis Estupiñán, who spent the season on loan at CA Osasuna.

He has been linked with the Premier League giants in the last few months. On July 15th, La Razón explained the Old Trafford club are ‘willing to bid’ for the Hornets left-back.

Marca has a short update on the Ecuador international, and they talk about Manchester United and Barcelona interest in the fullback.

‘Given this threat’ of interest from United and Barca, Watford have decided to recall him from his loan spell from Osasuna, mainly because Estupiñán has been a ‘revelation’ in the La Liga, managing a goal and five assists in 36 league appearances. 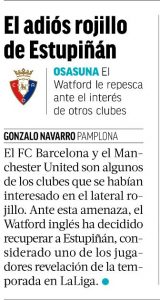 Watford initially agreed to allow Estupiñán join the Spanish club on a two-year loan deal. However, the newspaper states the English side are planning to include him in their squad for next season.

Marca’s claim on the South American comes a week after Diario de Navarra reported that Watford have sent a ‘formal communication’ to Osasuna, expressing their intention to recover the 22-year-old.

Estupiñán has already said goodbye to the Spanish club and it remains to be seen if Watford can hold on to him, if they are relegated from the Premier League.