Two days ago, AS reported the Citizens will ‘try to convince’ the striker to join them in the summer, while Real Madrid hope he continues in Germany for one more season, so that they can sign him in 2023.

On Thursday, we covered claims made by Sport that the Premier League winners have ‘already met’ with the 21-year-old’s camp to present their ‘latest offer’.

Meanwhile, reports from the German press continue to push the La Liga side as the main suitor for the Norway international. However, Friday’s edition of Mundo Deportivo claims the ‘truth is that Real Madrid do not see it that way’.

Carlo Ancelotti’s side are focusing all their efforts on Paris Saint-Germain’s Kylian Mbappé. 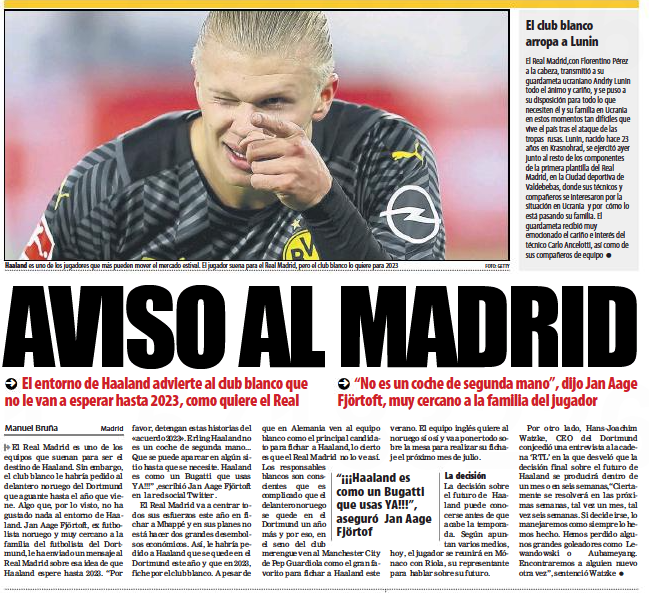 The Frenchman’s contract expires in June and although the forward will be available on a free transfer after this season, Real Madrid will have to offer him a hefty signing on bonus, big wages and large commission to his representatives.

Mundo explain that ‘making two large financial outlays’ is not in the Spanish giants’ plans and therefore, they will only look to take Mbappé.

Real Madrid are aware it is difficult for Haaland to stay at Dortmund for one more season and within the club, they view Pep Guardiola’s side as the ‘big favourite’ to land him.

Manchester City ‘want’ the BVB frontman and the report adds they are ‘going to put everything on the table’ to make Haaland’s signing happen in the summer.