It’s clear that Barcelona will bring in a new left-back as back up for Jordi Alba in the summer.

The La Liga winners have looked at various profiles and one which suits them is that of Nacho Monreal, according to Mundo Deportivo.

It’s explained the 33-year-old’s contract at Arsenal will run down at the end of the season, meaning he should be available on a free transfer.

In the offices of Camp Nou, the former Malaga man ‘fits the profile’ of the type of player Ernesto Valverde’s side are looking to sign, and their interest in the player has been echoed in England.

Monreal is aware he will not be the first choice left-back at Barcelona and is ready to accept a substitute’s role, if he is provided with an opportunity to join the Spanish champions.

There’s been some confusion in regards to when Monreal’s contract at the Emirates will expire.

He last signed an extension with the Gunners in January 2016 and Arsenal, on their official website only confirmed the defender signed a ‘long-term deal’. There was no mention about the length of the contract nor if there is an option to further extend it by a year. 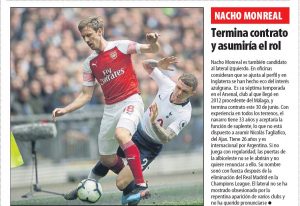 Earlier in January, several publications in England reported Unai Emery’s side have activated the clause in Monreal’s contract to keep him at the club until 2020.

If it’s true, then Barcelona will not be able to land the fullback on a free transfer.

Chelsea and Man City set to have new meetings for signing...

Leeds interest in defender backed up as Radrizzani’s attempts for Genoa...