With Stoke relegated to the Championship, Kevin Wimmer was sent to Hannover 96 for the season, who included a clause in the transfer allowing them to buy the centre-back for €12m after 24 competitive appearances.

This was how Kicker reported it back in December, and with 22 already under his belt, decisions need to be made.

The idea was for the Austrian to return to Germany, where he made a name for himself at Köln before his transfer to Tottenham, buy him for the set price and hopefully sell him for a profit.

However, with Hannover rock bottom of the Bundesliga, there is little chance of them making their money back on a player who hasn’t exactly stood out with his performances. 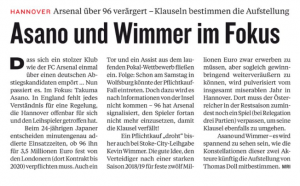 As things stand, Kicker in Germany are suggesting the Stoke loanee could be left out of some of the upcoming squads to avoid triggering the clause.

This is hardly how things were meant to go, and if this is what ends up happening, it means an extra problem for Stoke in the upcoming transfer window.